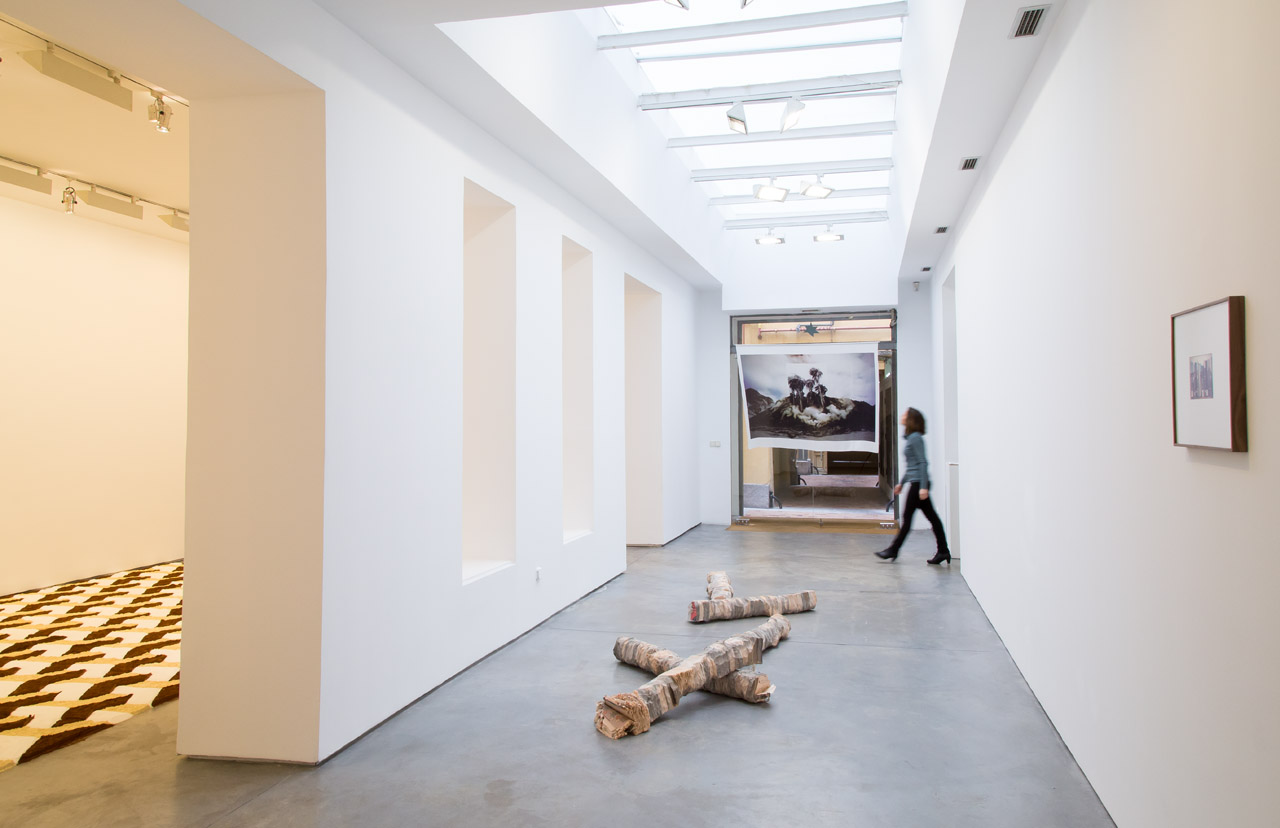 The horizon is a perceptual phenomenon whose presence only exists through the gaze. It occurs in an intangible space, in an ever-changing, unattainable limit. For this reason, this dynamic space becomes a symbol of consciousness; a metaphor for the threshold of the visible, the comprehensible, and of possibility.

The group exhibition curated by Iciar Sagarminaga, intends to expand the notion of the contemporary landscape. Its contemplation is the axis linking the work of the five guest artists: Felipe Arturo, Leyla Cárdenas, Elena Damiani, Miler Lagos and Sara Ramo. Through various media—sculpture, site-specific installation, photography, collage, video—the show offers an experience in the space that addresses a broader view of the landscape. By changing the framework through which urban, wild, archaeological, domestic and agricultural territories are considered, the experience of place and time also shift. Perceptions of the environment, the intimate space and present-continuous expand.

The investigations and works present in Always the horizon explore the heritage of landscape in the 21st century. Despite many differences among them, the works share a plastic and conceptual sensibility that alternates between abstract euphemism, the reconstructed image, and the allegorical figure.

The installation Olvidando la persistencia (Forgetting persistence) by Felipe Arturo proposes to construct a geometric pattern on the floor created from raw materials.This intervention reflects on the instability of monoculture systems and the consequences of their implementation, firmly driven by a globalized economy of the postcolonial era in which we live.

Alternately, the work of Leyla Cárdenas tries to capture the notion of space and time from an archaeological perspective. The artist uses building materials to create a minimalist and ethereal ruin. In this way, she proposes a metaphorical paradox that binds the future with the past and creates the mystery of whether what we see is a skeleton for a building under construction or a fragment of a collapsed structure.

The works in the show by both Elena Damiani and Sara Ramo oscillate between the found, the constructed, the factual, the invented, the material and immaterial. A Tropical Ending, by Elena Damiani, embraces two simultaneous existences: the object and image. Firstly, the digital print on a rice paper suspends lightly from the ceiling generating a shadow against the wall. At the same time, the image invites us to admire a supposedly Romantic landscape yet its composition refers to an ominous occurrence. A strategy that can also be seen in her piece Compilation No. 1, (from The Surface Reader series), where an invented sierra is formed on the spines of books on a shelf. The objects are there, and they are not there; the landscape exists, and it does not.

In the collages Parte de, Sara Ramo cuts photographs of an empty exhibition space and constructs a new world. The white cube (interior space) seems to morph into geologic forms (exterior space). Equally paradoxical is the video Oceano Possível (Possible Ocean), where we see the artist from behind, naked, sitting on the floor surrounded by blue pails filled with water, washing herself and paddling on a domesticated sea. Again, Ramo transports us from an enclosed place, this time to the waters of an imagined ocean.

Finally, the work of Miler Lagos reveals his interest in the essence of the materials that compose the current environment, as well as a reflection on the impact on nature caused by cultural production that human demand creates. In his installation Los fragmentos del tiempo (The fragments of time), pieces of newspapers are packed together and sculpted into shapes of tree branches, leaving us to see the fusion between material and its natural origin. At first sight, the sculptures may appear like true branches, however the intent is not to deceive but to confirm the nature of the material and its role in our daily lives.

Just as the horizon has a continuous presence and is positioned at a variably far distance, looking to the future and the past will always be just that, a projection, a reflection of dreams and memories in a permanent state of flux, always at an apparently infinite distance. The interpretations of the contemporary landscape by these artists, and their manipulations of it, open a new space to contemplate the role of human being situated between the line that separates earth from sky, within from without, the individual from the collective, and discard from desire. Therefore, without our gaze always toward the horizon, the exhibition invites us to gather our bearings and see where we have come from, how far we’ve gone, and where we are headed.