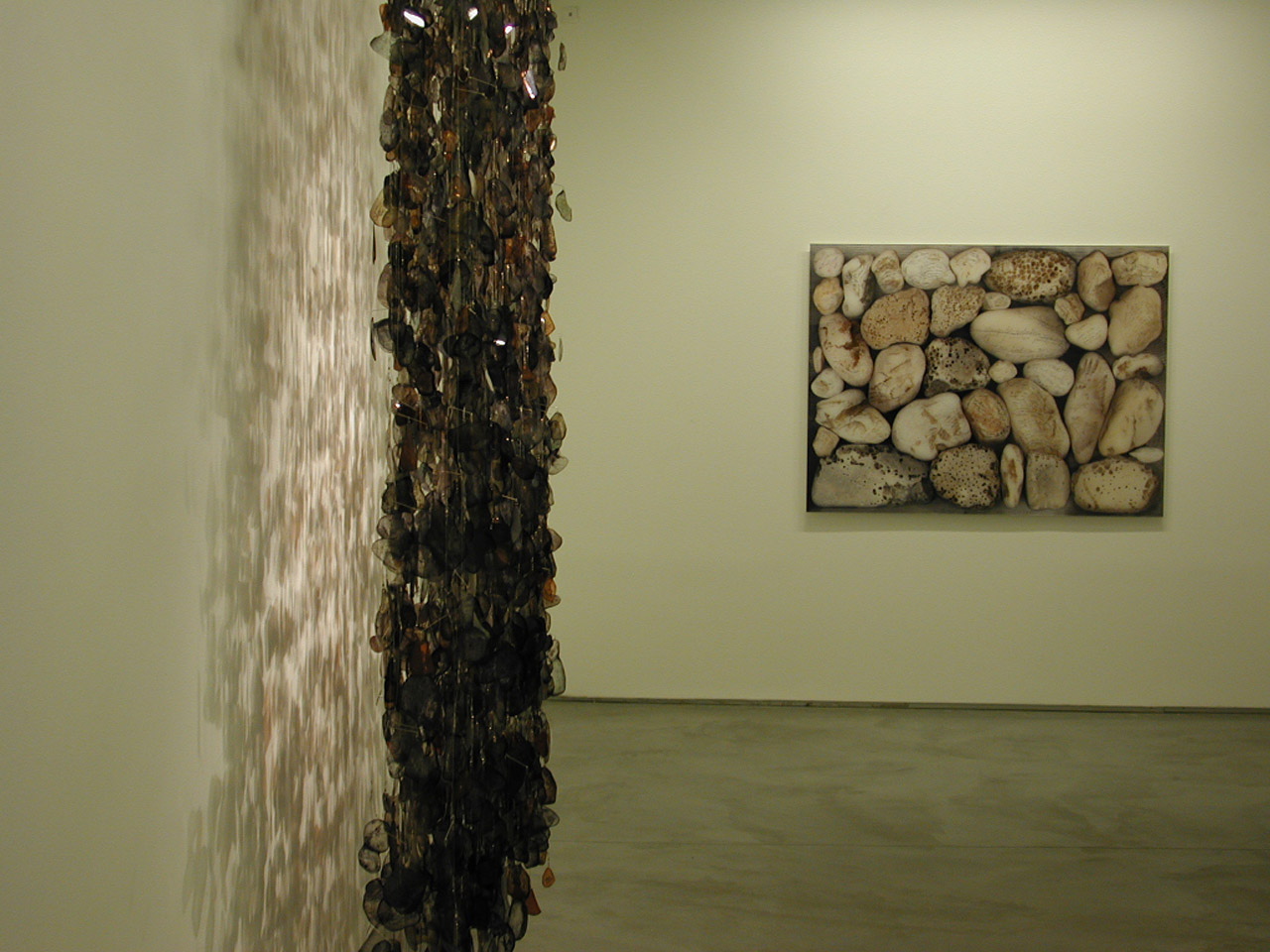 After exhibitions like Al filo, Espacios fronterizos and Travesías, in which Paloma Navares addressed issues with a high anthropological and social content – the body, illness, cloning, confinement, madness -, the encounter with “Cantos rodados” (rolling stones) is surprising.

Humble and inoffensive beach pebbles that form part of the unseen, relegated to non-existence in the perceptive registers and the sensorial stimuli of the urban and social context and the media imagery; pebbles that go unnoticed even by tourists, blinded by a plastic and theme park aesthetic. Stones that participate in the restless waste tip of the collective unconsciousness to which nature, and everything else that can be reduced to an exchange value, has been confined in the consumer society, the society of immediate satisfaction. But, for a spectator that ignores the tyranny of the immediate and of the screen, to take a deeper look at the history of art, Navares’ “Cantos rodados” evokes a still life that constructs a meditation about time, nature and reality conceived by the subtlety of a glance that names the human aspect from its absence, like a Flemish painting or the still life paintings of Zurbaran or Sanchez Cotan. Like the fly on the fruit, flower, jug or the onion, the pebble is taken to an artistic configuration in which it is turned into the subject of a reflection inscribed in the surfaces of visuality, not without that beauty that, as Lacan would say, is the veil of horror, scraping the dregs of the intangible and the abysmal of representation and desire. Archaeology excavated by Michel Foucault in “Las palabras y las cosas” (Words and things), as if history, rather than a succession of data, dates and events, were a laboratory of representations that is hatching, plotting and planning language, thought and gaze. Where things designate the invisible image of those that have made them, produced them, traded them, organized them and given them value. And where man himself disappears “like a face in the sand on the edge of the sea”.

But Navares looks through modern, rather than Baroque eyes, and Stones do not allude to the ephemeral nature of youth and beauty, the fleetingness of pleasure, the corruptibility of matter and memento mori, but rather to the mental configurations of today’s society: the machine, technology and scientific control, hypertext and illegibility, the real object, cameras and the imaginary projections that end up shaping their disappearance, their simulation and their reality, the dregs of memory and time recorded on the indefinite matter/screen of dreams and imagination. Stones are language, rather than nature: quotes, brands, incisions, fragments; writings that plot, correct, illuminate or erase a polysemic reading, that is not aimed at creating sense and meaning, but, rather they are a morphological study of an object whose original identity is unfolded in a multiplicity of images in which the criteria of truth have been replaced by the simulated, objects that exhibit an appearance rather than their essence. The work of Navares forms part of the structure of the society of communication, technology and virtuality: real objects or actions are not seen in their material substance, place, time and dimension; they are seen in their registers and representations. Echoes, resonances, shadows and traces of reality are all that reach us.  A knowledge of things, of events, is built from an articulation of recordings, images and sign systems.  It is ghostly, a hidden zone that, like the inside of a pebble, is neglected, uncontrolled.

The way in which the works interact perceptively and in which they are laid out spatially configures a laboratory in which the diverse mechanisms of vision operate, interfering with the real object in multiple planes of transference and simulations: the “cascade” or curtain, sample of hanging elements or stone-organs that have lost their materiality, in an ambiguity between obscurity and transparency in which front and back do not exist; magnifying glasses, scientific instruments equipped with tweezers that grip the (image of) the stone to focus on it and examine it, with the intention of exercising absolute control, a maximum precision, in an attempt to penetrate the invisible, what is beyond the reach of the eye, reaching a monstrous vision, prostheses of sight, “seeing more”; photographs, flat containers of an order that records, classifies and files dreams, symbols, words, signs and myths, ideas and cultural legacies inscribed in false, perspex or paper, geological  matter, boxes that guard and confine the pre-history of the memory of language and psyche; the real stone, an object removed from its context and placed on the wall, impenetrable surface and screen that receives symbolic projections; the flow of a vital element – water – in which the body floats static and inert, constantly moved by the current. Copies, reproductions, transcriptions in which the de-materialised, de-located stone-object is evoked musically, through the crystal of a magnifying glass, by the words of a Bob Dylan song, Rolling Stone. And it rolls from place to place with the sound of the water that drags it along, slowly, with a diffuse perception, as if it were a dream, and no longer real.