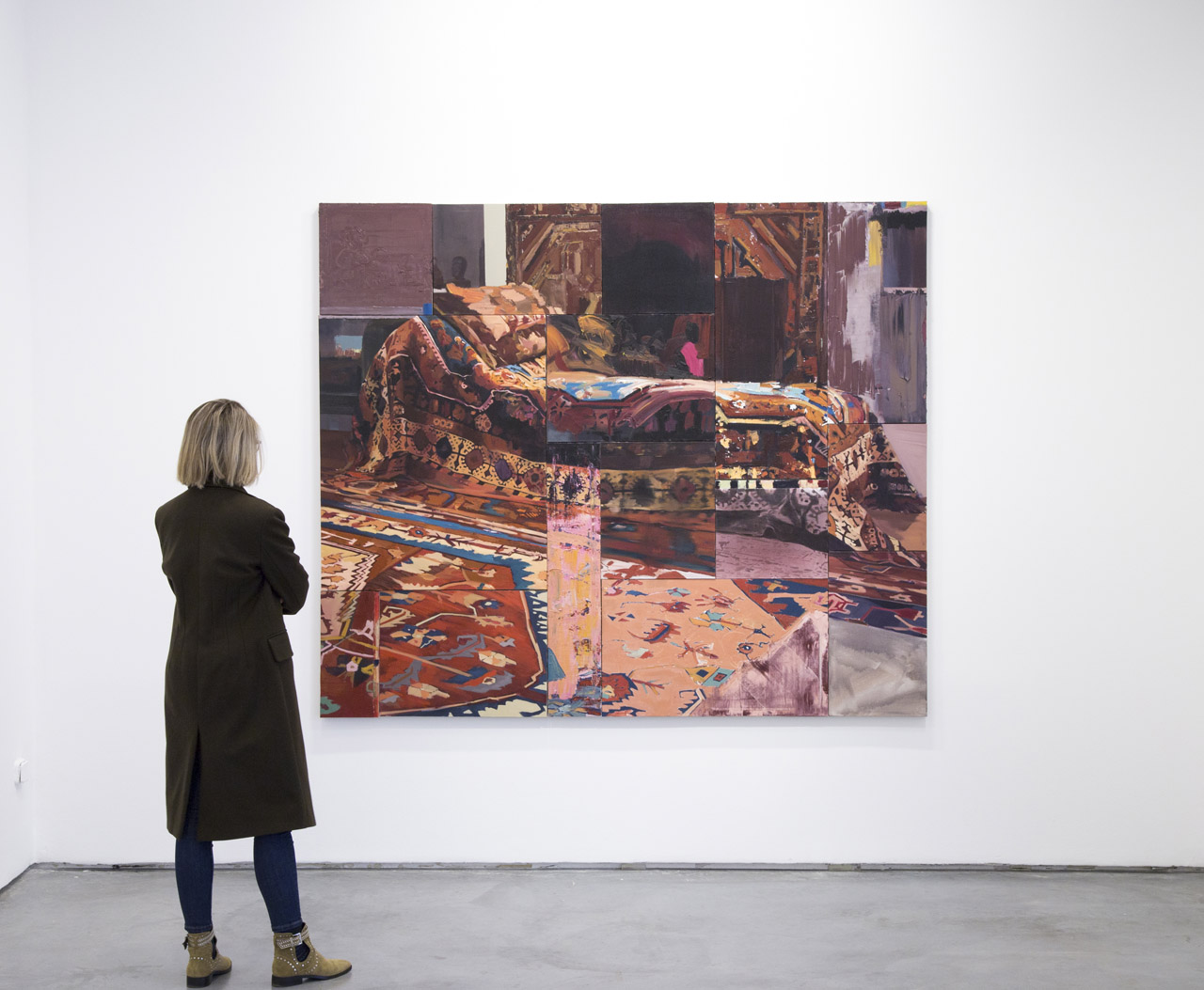 Max Estrella is pleased to present Nacho Martin Silva’s (Madrid, 1977) most recent work. Titled Woodworm in Lumber, this is his first exhibition at the gallery after joining Max Estrella’s roster. Three large-format paintings work as the show’s central axis and serve as a narrative strategy. It questions the unequivocal interpretation of history, which is constructed by the prevailing order. References for these works are taken from exhibiting rooms in different museums: the Sigmund Freud House-Museum in London, the Museum of Decorative Arts of Madrid, and the Archaeological Museum of Madrid.

All exhibited works stand for the possibility of enjoying multiple optics of different events simultaneously. A course is set, just as the tunnels excavated by woodworm in lumber. There is a large network of connections that leave a discreet trail behind. These are only noticeable through a deeper look. Therefore a multi-focus approach is presented. A construct allows divergent micro-histories from the official discourse.

Disorientation is one of the most effective tactics to achieve destabilization. When referring to a structure, metaphorically or literally, there are two possibilities. On one hand, damage could be produced by actions of great magnitude. That is, planned gestures. On the other, it may also happen because of silent actions caused by natural instinct. In a literal sense, woodworms are an example of the latter. Larvae of different species of coleoptera excavate labyrinthine tunnels, feeding on and living in the same wood that they end up debilitating.

Non-obvious superstructures or the education and context of each individual condition an “express” visit to the narrative-generating museum. As with lumber and woodworms, an in-depth reading reveals an intricate web of possibilities to inhabit, navigate, digest and destruct them. The latter is not meant in a literal sense; it refers to collapse due to deterioration. This is caused by repeated rethinking of the appropriation of an image that transforms into another, hence modifying its meaning. These measured non-obvious incursions introduce confusion, and give the spectator access to a new analysis that sustains Martín Silva’s sense of purpose.

In the early 1970s, Gordon Matta-Clarck, central member of the Anarchitecture group, signed a poetical declaration of principles: Here is what we have to offer you in its most elaborate form – confusion guided by a clear sense of purpose. Intentional confusion is a good guide for almost any discovery.

Nacho Martín Silva lives and works in Madrid. He has presented solo exhibitions in Centro de Arte Alcobendas (Madrid), Spring Break Art Show (New York) and Fundació Pilar i Joan Miró (Mallorca). He received the Pilar Juncosa & Sotheby’s Biennial Award for Artistic Creation as well as a Casa Velázquez Residency. His work is present in multiple collections such as Jorge Pérez, María Cristina Masaveu Peterson, DKV, and Absolut, among others.