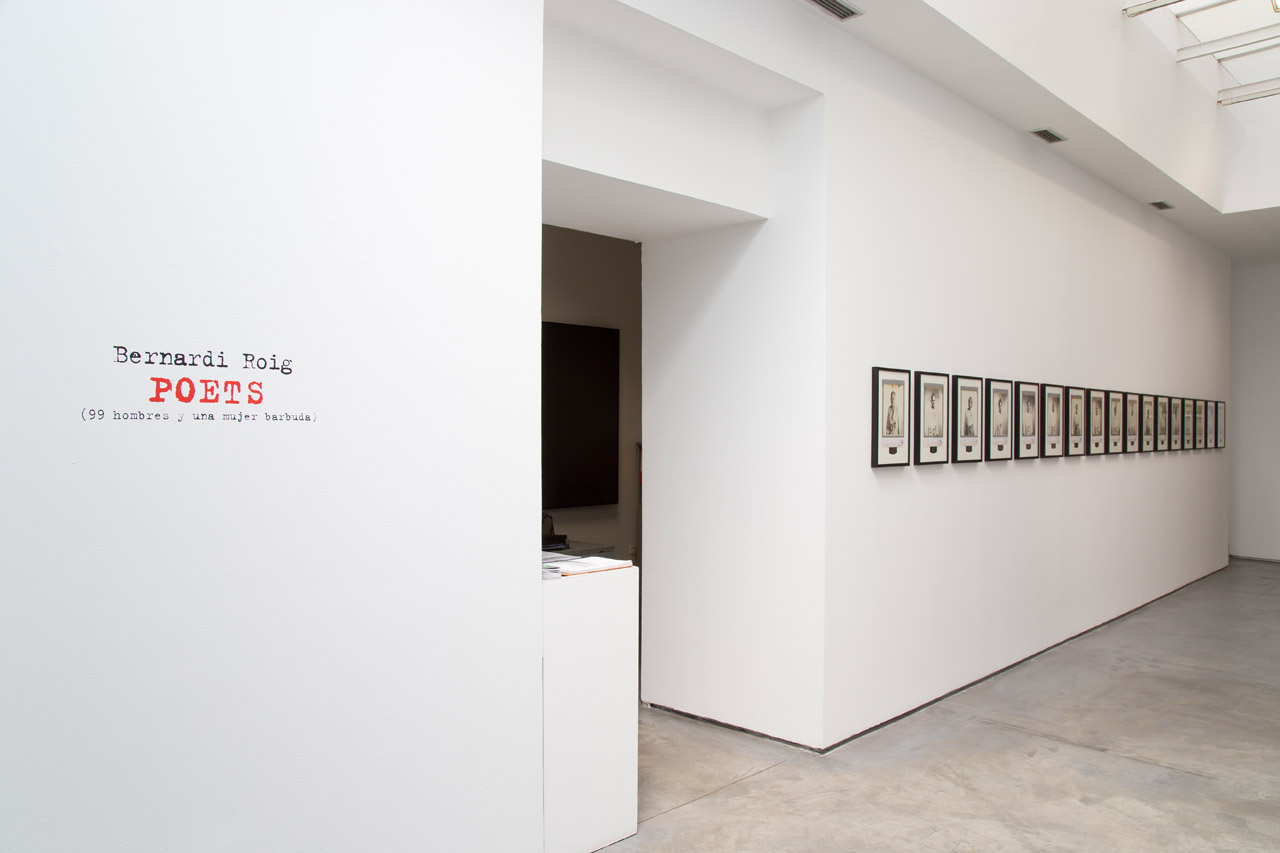 This latest incursion of the artist into the field of photography is a continuation on another scale of the Walking on Faces project he presented in 2012 at the gothic building of La Lonja in Palma de Mallorca, where he completely covered the floor of the gothic building with 1,870 portraits.

POETS is in ways like an exhibition of two-dimensional sculpture. And, from a theatrical optic, it is also a kind of casting or parade looking for the potential actors for a play still waiting to be written.

In his sculpture per se, Bernardí Roig works with plaster casts of real people from his own personal circle. After turning the casts into white sculptures, these depictions are assigned different “roles” to play in the grand theatre of appearances which is an exhibition.

The method followed in POETS is similar but with a subtle difference. While in the sculptural process one obtains an image from the direct contact between the material and the subject, in the instantaneous Polaroid photographic process the cast is the photosensitive film used in the camera which captures light and, with it, the image once the diaphragm is opened. This capture, or cast of the real, is not visible until a chemical reagent—the developing paste—is spread over the film with pressure rollers allowing the appearance of the image after four and a half minutes—the time for it to set.

In both cases, the resulting image is not an imitation in the classic sense of the term. It is not factual, nor does it require any particular talent, skill or artistic magic. Rather it is a transfer from one place to another by mechanised manual processes. Nor is any type of interpretation or mediation applied. On the contrary, whereas sculpture treats similarity as a ritual of tactile duplication, the instant photography treats it as a rhetoric of optical duplication. Both methods lead to the presence of an absence.

POETS is a gallery of male portraits (and a bearded Lady). They are figures trapped at the precise moment of their presence and stripped of any external attribute that is not the austerity of their discarnate faces. The captured image is the phantasmatic survival of its disappearance, without other signs that their own bag of shadow.

The models used (writers, art critics, gallery owners, collectors, teachers, directors of museums, philosophers, poets, a photographer and a former legionnaire) are previously given an appearance of neglect and poverty, as characters in a collective drama whose plot is unknown. They are all poets, even the ones who actually are.

All are men, except for a woman with masculine facial attribute. They are in front of a mirror. They are subjected to the relentless return of his own face, raw, without additives, wrapped in the Shroud of its own expression, like a range of patterns of sentenced masculinity.

The POETS project consists of 100 polaroids (36 x 21 cm each) taken using a German 18 x 24 wooden camera made in 1920 which has been restored and conditioned by Alan Prodanov for the body of a special Polaroid 8 x 10”. The photos are developed chemically using an external processor.

A leather-bound, hardback colour catalogue measuring 22 x 32 cm, with approximately 220 pages, will be prepared for the occasion. The catalogue will feature all the portraits, each one accompanied by a personalised text written by Bernardí Roig and the recovery of a text against iconoclasm, written in the 9th century by Nikephoros the Patriarch. The catalogue will be published in an edition of 200, of which 100 will be numbered and signed by the artist.

After his successful show Shadows Must Dance at the Ca’Pesaro Galleria Internazionale d’Art Moderna in Venice, coinciding with the last Biennale, Bernardí Roig has produced a new entry, Glasstress, at the Palazzo Franchetti, and TRA, the second part of In-finitum, in the Palazzo Fortuny both included on the programme of the 54th Biennale.

Foremost among his one-man shows over the last years were:

He has been awarded with the XXXVII Contemporary Art Prize, Princess Grace Foundation; Monte Carlo, Monaco (2003); the Biennial of Alexandria Official Prize, Egypt (2002); the Premio Especial Pilar Juncosa y Sotheby’s, Fundació Pilar i Joan Miró a Mallorca (1997) and the Official Prize of the XXI International Biennal of Graphic Art, Ljubljana, Slovenia (1995), among others.